“DHD’s strategy is to offer the features studios need in a form which is easy to install, efficient to operate, physically compact and highly reliable,” says Christoph Gottert, Head of International Sales. “Our systems are based on compact desktop consoles with integral displays that take the stress out of live production by showing exactly what operators need to know, from audio levels right through to assignable-control configurations. That approach has made our systems highly successful throughout the broadcast audio production market.”

DHD’s new DX2 is a fully featured desktop audio console designed for use wherever space is at a premium, such as newsroom desks, podcast studios, voiceover suites and video editing booths. It provides the same assistive mixing functions as other DHD consoles, including motorised faders, auto-mix and auto level gain. Like all DHD mixing consoles, the DX2 integrates easily with DHD processing cores to form a complete system. Fully compatible with all DHD cores running version 10 firmware, it comes as a four-fader console with an optional six-fader expansion unit. A 3.5 mm output jack at the rear of the console doubles as an input which can be used to connect a smartphone for live telephone interviews. 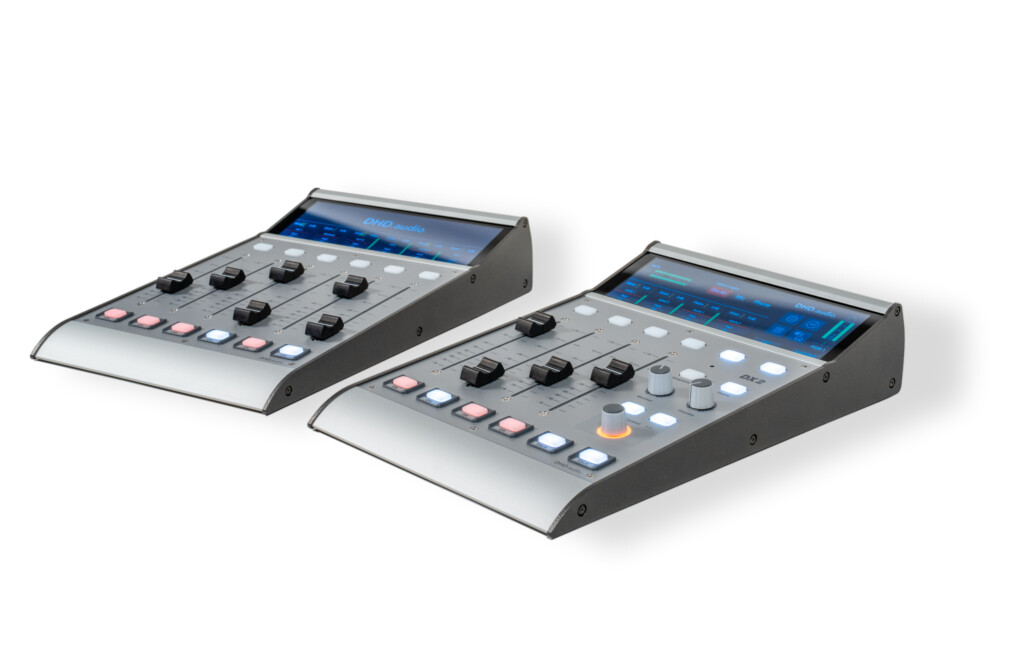 Also on show at MPTS 2022 will be the latest additions to DHD’s range of audio production processing cores. These integrate elements such as control surfaces, routing and external-device interfacing into a stand-alone or distributed system. The new XC3-core and XD3-core provide full support for intra-site as well as multi-site IP-based device control and audio-over-IP signal distribution. Automated workflows and product virtualisation are fully supported.

The DHD XC3 IP core is designed for use in on-air studios. It comprises two dual-core DSP modules which combine into a compact 1U. These jointly support up to 48 stereo faders, 72 stereo buses and 16 channels of AES67 IP audio. IPx expansion modules can be added to accommodate 128 channels of AES67/Ravenna IP audio in/out and up to 512 Dante channels. A companion module, the new XC3 Concentrator, allows easy interconnection of multiple DHD IPx modules, control surfaces and I/O modules.

DHD’s new XD3 is a high-performance IP core for use with large mixing and routing systems. It includes support for demanding networked operations such as DHD web apps. The XD3 IP core allows fully redundant configuration and can accommodate an optional router. Up to 96 stereo faders, 126 stereo buses and 24 Gigabit Ethernet audio ports are supported by the XD3 router and IP core combination.

DHD will also be promoting the increased versatility of its latest-generation Version 10 firmware.  These include enhanced security and management capabilities, unified user management based on web apps, expanded fader and bus handling, and refinements to the DHD Toolbox configuration software. Security and management feature additions range from a powerful new onboarding sequence for initial setup plus EBU security measures for media nodes.