Severity: Not affected Researchers have recently uncovered security issues with an open-source logging library called ‘log4j’. The java-based log4j library is a widely deployed logging utility and used in many cloud applications that utilize Apache web servers. If exploited, it could result into Remote Code Execution. This issue is also known as 'log4shell' or CVE-2021-44228 All DHD Series 52 hardware, including XC2, XD2, XS2 cores, is not utilizing the log4j [...]

Toolbox & Firmware Version 9.1 Released + New Hardware Revisions As the new year is already at full speed, we've been busy doing the final work on version 9.1, which is just released. You can download the new Firmware & Toolbox from the DHD.audio support portal. Top Features for Version 9.1 UTF8-Support to show Unicode characters on TFT displays for channel labels, global labels and buttons. This includes characters from [...] 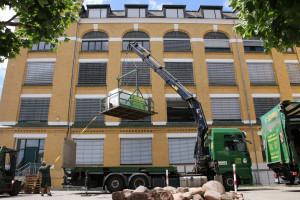 Our old SMT oven had to leave the building through the window to make room for our new SMT reflow soldering system.

With the first new RX2 and SX2 systems shipping, we just released the Firmware and Toolbox version 9. Both can now be downloaded from the DHD.audio Support Portal. Other topics in this issue: New 52-7424A XC2 Core, SX2 Bundles, DHD.audio on Instagram and discontinuation of 52/SX Bundles. Top Features For Version 9 Support for new hardware: RX2 and SX2 Increased: up to 300 logic functions, 50 mixer snapshots and up to [...]